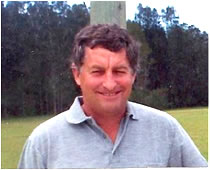 John became involved in hockey whilst attending Chatham Primary School and represented M.V.J H.A at State Championships in all age groups up until completing his high school studies at Taree High School. He then left the area for a number of years to further his education and training.

In 1983 John was transferred to Wingham High School from St Marys High School and immediately became involved in hockey again as a player, coach and administrator.

He was the negotiator with GTCC, State Government departments and associated contractors prior to, and during, the construction of the Alan Taylor Memorial field and was on the committee for the development of the Terry Launders Hockey Field.

He is a life member of both Chatham and Wingham Hockey Clubs. John was awarded an Australian Sports Medal in 2000 for his services to hockey.
[ Back to Previous Page ]